While there are numerous differing domains depending on the cell type, there are several characteristic domains common amongst all MYLK isoforms. MYLK’s contain a catalytic core domain with an ATP binding domain. On either sides of the catalytic core sit calcium ion/calmodulin binding sites. Binding of calcium ion to this domain increases the affinity of MYLK binding to myosin light chain. This myosin binding domain is located at the C-Terminus end of the kinase. On the other side of the kinase at the N-Terminus end, sits the actin-binding domain, which allows MYLK to form interactions with actin filaments, keeping it in place.[4][5] 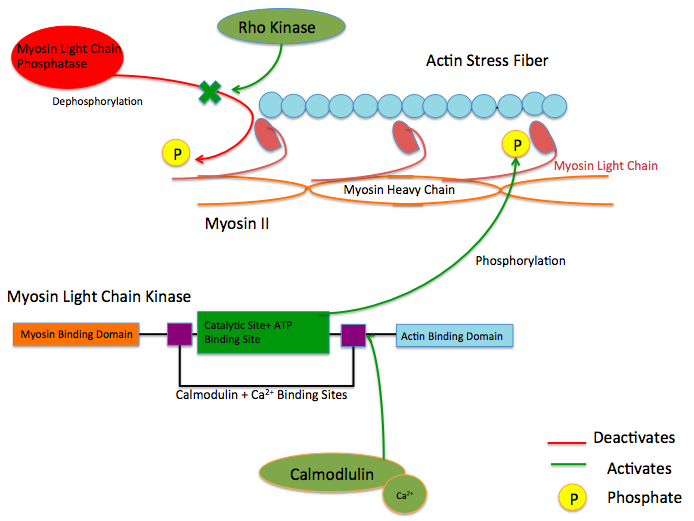 Structural Diagram and Regulation of MYLK

Some pulmonary disorders have been found to arise due to an inability of MYLK to function properly in lung cells. Over-activity in MYLK creates an imbalance in mechanical forces between adjacent endothelial and lung tissue cells. An imbalance may result in acute respiratory distress syndrome, in which fluid is able to pass into the alveoli.[13] Within the cells, MYLK provides an inward pulling force, phosphorylating myosin light chain causing a contraction of the myosin/actin stress fiber complex. Conversely, cell-cell adhesion via tight and adherens junctions, along with anchoring to extra cellular matrix (ECM) via integrins and focal adhesion proteins results in an outward pulling force. Myosin light chain pulls the actin stress fiber attached to the cadherin, resisting the force of the adjacent cell's cadherin. However, when the inward pulling force of the actin stress fiber becomes greater than the outward pulling force of the cell adhesion molecules due to an overactive MYLK, tissues can become slightly pulled apart and leaky, leading to passage of fluid into the lungs.[14]

Another source of smooth muscle disorders like ischemia–reperfusion, hypertension, and coronary artery disease arise when mutations to protein kinase C (PKC) result in excessive inhibition of MYLP, which counteracts the activity of MYLK by dephosphorylating myosin light chain. Because myosin light chain has no inherent phosphate cleaving property over active PKC prevents the dephosphorylation of myosin light protein leaving it in the activated conformation, causing an increase in smooth muscle contraction.[12]